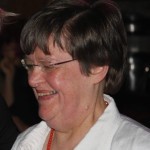 Arlette Vandenberghe graduated in 1975 as a doctor of veterinary medicine. She then studied veterinary disease at the Tropical Institute of Antwerp. She was in fact the first female veterinarian to take this course. At that time the Director of the Tropical institute wanted to speak with her about this, because they did not know what to do with her. She could start her training when she agreed to go to the tropics. The director was looking for its "mission-place".
Beginning in August 1976, she left for the Ivory Coast in Abodjan until August 1978, after that came Mozambique (Moputo) August 1978 to February 1981, and Zaire (now back Congo) Kinshasa from June 1981 until June 1983.
When she returned to Belgium, she was looking for a permanent job in the Antwerp region. She could start on the general medical laboratory (AML) as agent for the vets. She became extremely dedicated in her work and was avalaible from the early morning untill late in the evening helping veterinarians with their diagnosis through additional tests and opinions.

She has always been very passionate about her work and attended several trainings at home and abroad. She often stayed in the background and did not like the spotlight, but supported her colleagues. She has been a member of SAVAB-Flanders since the establishment and was a founder of the working lab around 1987-1988. She was the first chairman of the working group, which later changed its name and became the working group 'Internal Medicine'. When the AML klinilab took over in 2006-2007 Diane Brosens came along as a veterinarian, later joined colleague Delphine Criel the Medvet team in 2009 (such as AML veterinary medicine was called). Also Hilde De Cock, DACVP joined the team.

In August 2014 Arlette retired, and was replaced by veterinarian Greet Junius, DECVIM. The working group is still based on separate meetings with the veterinarians of the laboratory and veterinarians with an interest in internal medicine.

Arlette is also the proud mother of a daughter, who works in London.